– and call me in the morning.

Do our senses really know the difference between a high-density image of nature on a television screen and the real thing? And which one is better at reducing minor stress—mountain scenery on your HD plasma TV or Doses of Nature itself? 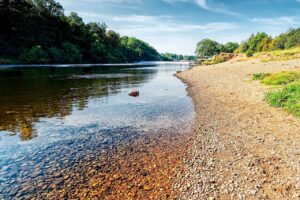 Ask most health practitioners or psychotherapists and you will find that they intuitively agree that direct experiences with nature, such as gazing at a mountain vista or a stroll by an ocean or lakefront, have a positive effect on the body. But how do today’s technology-generated visual images of nature compare to experiences of seeing those same scenes in reality? And can we substitute this technology with individuals who may not have access to nature and obtain the same effects? As the visual images we see on our HD plasma TVs become increasingly detailed, are these images perceived in the same way we perceive that mountain vista or waves crashing on a favorite beach?

University of Washington researchers recently set out to examine whether the actual experience of nature or nature depicted on a high-density plasma screen could affect stress levels in the body in 90 college students. To do so they measured heart rate recovery from minor stress when participants were subsequently exposed to a natural scene through a  window [thus eliminating sounds and smells of nature], the same natural scene on an HD plasma screen, or a blank wall. The heart rate of those individuals who looked at the natural scene through a window decreased more rapidly than in the two other situations. In fact, the HD plasma screen had no more effect than the blank wall on heart rate recovery.

Increased Blood Flow to the Brain

In May 2011, Robert Mendick, a reporter for The Telegraph, wrote an article (https://www.telegraph.co.uk/culture/art)  about an experiment conducted by Professor Semir Zeki, chair in neuroaesthetics at University College London. Zeki explained, “We wanted to see what happens in the brain when you look at beautiful paintings.” The experiment concluded when you look at art “whether it is a landscape, a still life, an abstract or a portrait – there is strong activity in that part of the brain related to pleasure.” The participants underwent brain scans while being shown a series of 30  paintings by major artists. When viewing art they considered most beautiful their blood flow increased in a certain part of the brain by as much as 10%, which is the equivalent to gazing at a loved one. Paintings by John Constable, Ingres, and Guido Reni produced the most powerful ‘pleasure’ response.

The idea that nature affects our bodies’ ability to recover from stress or illness is not a new theory. In fact, the field of hospital design has been investigating the role of nature in patient recovery for quite a few years. As early as 1984, Roger Ulrich conducted a study of patients recovering from gallbladder surgery and found that those with views of trees from their hospital windows experienced better outcomes than those looking at brick walls. Those looking at nature went home almost a day earlier, had $550 lower hospital costs, used fewer medications, had fewer minor complications, and, in general, had a more positive sense of well-being upon discharge. Ulrich’s studies and subsequent research have provided a strong argument that medical environments should be constructed to support physical recovery.

Evidence-based design is now included in most healthcare institutions because it can make measurable differences in patients’ health and hospital stays. Gardens in healthcare facilities are one of the most common design elements. They are often placed in specific locations so individuals in waiting rooms can have access to the view or near treatment areas for oncology and post-op patients. “Healing” plants—plants that have medicinal purposes—may also be included to capitalize on the notion of herbs providing certain types of pharmacological intervention.

As an art therapist, I regularly prescribe artmaking experiences that include nature and some time spent in an outdoor environment as a method of reducing stress. Clients may be sketching their impressions of a landscape or tree, painting plein air, or simply meditating on the images and sensory experiences found in nature and writing their  thoughts in a journal. I wonder if people, and particularly children, are losing their direct experiences with nature and its benefits, as we come to depend on the Discovery Channel as a substitute for the outdoors. Technology is amazing, but apparently, our bodies are not fooled by it when it comes to an azure blue sky, rhythmic ocean waves,  or a pine tree forest. In this time of concern for the health of our planet, it’s good to remember that by taking care to preserve nature, we are also taking better care of ourselves when it comes to stress reduction.